»Info Days in Irig and Sid

Info Days in Irig and Sid

1
Mar
2015
Two Info Day meetings have been organised, first on 26th of February in Irig and 27th of February in Sid municipality under the process of establishment of Local Action Group of Fruska Gora – Danube Region (LAG FGDR). 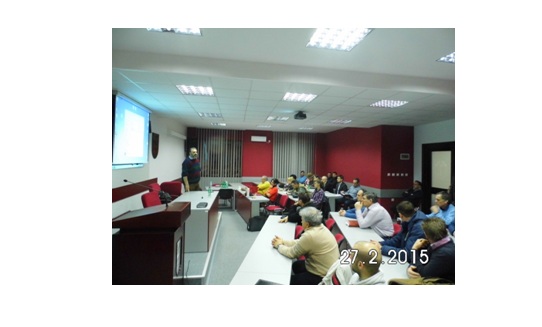 The meeting were led by Dejan Gluvacevic, the Coordinator of Working Group of establishment of LAG FGDR, where 34 partiicipants from Irig and 32 participants from Sid municipality have received all relevant information about EU CLLD approach and already announced IPARD Programe with 230 mil. Euros of support to rural development in Serbia.

After introductional presentations, the following vivd discussion, especiaally in Sid municipality have shown how huge interest exists related to rural development opportunities and support of fundings. All participants have filled the forms with their contacts allowing future communication with Working group which maintain the process.

These meeting were the final steps in information campaign conducted and finalised in the first 2 months of 2015. On 5 Info Day meeting, some 148 participants have participated and all of them have filled the form with basic data with their contacts and also, about their interest to participate in further activities, in extent that they have indicated.

The next step in plan is to be organised LEADER 1 Development Conference in Vrdnik for 60 participants from 5 muniisipalities of Fruska Gora – Danube Region and guuesting presentators who are invited from neighbouring LAG Baranja in Croatia and also, some other who are waited for confirmation.

The Conference should become the meeting place for 5 Local Meyers from the area under LAG initiative, who shall sign the framework document of cooperation in the form of Protocol of inter-municipal cooperation in sustainable development.

The final information related to the Conference will be announced as soon as participation of all invited participants is confirmed.